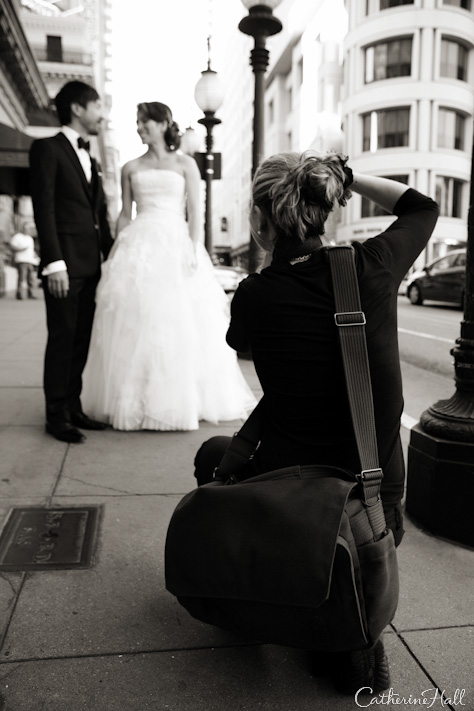 In this recent shoot in San Francisco (picture), I felt right at home blending my bag in with those of the myriad frazzled bicycle messengers. (Until everyone saw me shooting a beautiful bride, of course!)

The charcoal canvas material and lack of front logo practically begs to be hauled off to some developing country inviting everyone along the way to NOT notice the photographer in their midst.

Finally, we have the option of a great camera bag that avoids the proud display of a colorful logo against a jet-black synthetic exterior.

With both an incredibly well padded non-slip shoulder strap and a handle, the Pro Messenger bags are surprisingly easy to carry.

The front flap uses either a magnet for quiet access or it can fold out, to use the biggest, loudest, velcro pads I have ever seen. (Great for those locations where your gear needs a bit more protection.)

The back pocket will easily hold a small laptop and somehow, despite the slim profile, the bags hold a ton of gear. I tested the Pro Messenger 200 AW and managed to find room for my camera, four lenses, a flash, a bag of goodies, and my iPad … wow.

Catch the launch of the LowePro Pro Messenger AW Series camera bags at the PDN PhotoPlus 2011 Expo this week. Of course, while you are there, don’t miss my seminar on “Building Your Wedding Brand in New Media” this Friday, October 28, at 3.45p.m EDT.

Interview with AfterCapture Presented by Wacom

How to Keep Projectors from Murdering Your Images 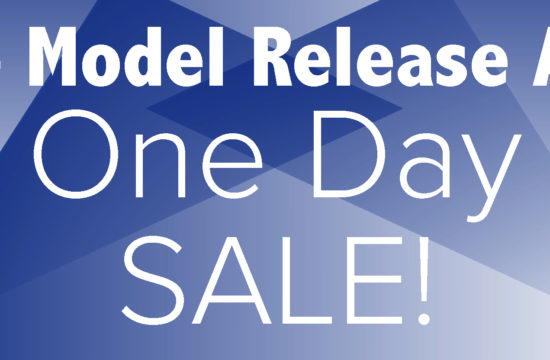 I’ve been looking for a messenger bag and came across the Think Think Retrospective first, then found the LP Pro Messenger 180AW. The one comment I did find about the TT that I didn’t like was the person said the sides of the bag had no padding, just the material. I’m trying to find out if the LP is the same way or did LP put some padding into the sides of the messenger bag? Thanks!

Hi, I was searching for a comparison between Retrospective and Pro Messenger, and saw this debate going on.

Well, to be honest, I would argue the first camera bag with this kind of concept was Domke’s satchel line. To my knowledge, the Domke satchel line has been around for more than 10 years. However, I think who designed the concept first doesn’t matter – as some people pointed out here, the concept of satchel/messenger bags traces all the way back to 19th century (although Timbuk2 bags are cool, they are not the first).

So please stop argue which ones were first and which one copied which. I’ve used all four major modern camera bag brands – Domke, Thinktank, Lowepro, Tamrac. Each of them has its own unique characteristics. I’m sure Retrospective and Pro Messenger both have pros and cons. Which one is better will depend on your needs, not which one was the first.

I thought that I should chime in on this discussion as this post and subsequent comments aided my buying decision.

I live in NYC and carry my kit with me daily. I was using a knapsack, but found it to be difficult to get to my camera quickly, let alone change lenses on the fly. As such, it was affecting my shooting habits. So, I began researching for a bag that would allow me easy access.

My first step was going to B&H. They always have a large amount of bags on display, making it easy to see what does and doesn’t work. Amongst the bags, the LowePro 180 was on display. I looked at it and immediately saw it as a viable candidate. This bag would allow me to pull out my camera at a moment’s notice, yet was extremely sturdy and protective.

While looking it over, I overheard a customer next to me ask a sales associate if B&H carried ThinkTank. He wanted to compare the two. I had never heard of ThinkTank and made a mental note to google them when I got home.

My purchases are always a several-step process. I like to research and get all of my facts straight before buying, so I left B&H empty-handed but with the 180 at the top of my list (followed by several other bags I saw that day).

Later that night, when I got home, I jumped on to my computer and began googling the LowePro bag to see other users’ feedback. I came upon this website which had a glowing review. But, after researching the credentials of “Catherine Hall”, I saw that she is partnered with LowePro and that immediately made the review suspect to me. Then I read the comments which jogged my memory about ThinkTank. LowePro a “blatant rip-off”??? This was a smack down. Obviously ThinkTank reps were posting these comments. (general users, unless they are fanboys, don’t comment like that, and I doubt that there are ThinkTank fanboys. Are there?)

So, I wanted to see what all of the fuss was about. I googled ThinkTank, and found their website. Looking through their myriad of bags, I came across their Retrospective line. Very interesting… And yes, extremely similar to the LowePro. This now required an up-close, direct comparison of the two. I googled for dealers here in NYC and as luck would have it, Adorama carried both lines.

That Sunday, I got up early and trekked over to Adorama. After a few minutes of wait, I was called on, and I asked to see the LowePro 180 and the ThinkTank Retrospective 20.

I spent a good 20 minutes examining both bags very closely, and yes, if true that the ThinkTank proceeded the LowePro by over a year, I could easily see its influence on LowePro’s design. Without a doubt though, the LowePro was a vast improvement. The ThinkTank was extremely flimsy in comparison to the ridiculously solid LowePro. In fact, I was stunned at how thin the material was on the ThinkTank. Their product photography does a good job in hiding this fact.

Again, if true that ThinkTank proceeded the LowePro by over a year, the velcro-silencing feature was obviously done first by ThinkTank. It is a great idea, but again, LowePro’s execution of the idea is much more elegant.

If you are on the fence between these two bags, I recommend that you research them for yourself. But, if you want my opinion, I say go with the LowePro. They took a great idea and vastly improved on it. It is more elegant, more sophisticated, and definitely far more robust. I am extremely happy with it. I just traveled through a couple of airports with it as a carryone and I felt EXTREMELY comfortable with its protection of my equipment. I did not need to treat it with delicacy. Had I had the ThinkTank, I would have been nowhere near as confidant.

In conclusion, please note that I am not affiliated with either LowePro or ThinkTank, and that my purchasing choice was completely unbiased, borne out of careful and thoughtful research.

To Martin, David, and Vee…could you please add more to the debate other than “blatant rip-off” and “stealing their design ideas”? You are either ThinkTank affiliated (if so, very mature), or fanboys (if so, very mature). And if you want to get personal about it, Timbuk2 could easily say that ThinkTank stole their ideas. These are irrelevant arguments. Instead, objectively debate on features and construction. Crying “blatant rip-off” is nothing more than a bullying attempt to divert the reader’s attention away from truthful comparisons, perhaps resulting in an undesired conclusion.

Anyway, my two cents (albeit, long winded). I am just happy that I found a bag to fit my needs as a mobile photographer. Now I want to try the 200. And don’t worry. I will keep ThinkTank on my list of bags to check in on from time to time.

Seriously? I looked at both side by side, and preferred the Lowe Pro; the faux canvass is preferable for me to the nylon type of the Think Tank. The LP also has an exterior pocket that zips, the TT exterior pockets do not fasten shut, just fold over. The LP has better padding to my eye as well. Advantage Lowe Pro. Not sure why everyone’s all bent out of shape. Henry Ford made the first production automobile, doesn’t mean that another company isn’t allowed to make a better car. Is a bag a proprietary thing? I think not.

Wow. There appears to be a lot of emotion behind these comments. I understand that we all are protective of our favorite gear but I would like to take the opportunity to look at the products objectively.

1. Messenger bags are very popular in our world and the design was certainly not created by any specific camera bag manufacturer. In fact, the first messenger bag was created for the purpose of carrying mail. The bags design history has continued as it became used by bicycle messengers, computer carriers and they are now also an urban fashion icon.

2. Messenger bags are typically understated by very nature. This has been true throughout the bags history.

4. Yes, it’s a soft bag. And yes, there are other soft bags out there. Having never used a bag of this type before, the Lowepro messenger bag was revolutionary for me to experience.

5. I am stoked by the fact that this bag incorporates all of Lowepro’s brilliant technology. The fact that it looks like regular soft bag is part of its genius. It cleverly disguises its innovations so photographers can move freely in urban environments without attracting attention to their gear.

I have heard many great reviews about ThinkTank as a company and I am sure their bag is very well designed. After some online research I have concluded, however, that other than sharing the messenger camera bag style, there are few similarities and I personally prefer the Lowepro version for my specific needs.

That bag is a blatant rip-off of the Think tank photo Retrospective line. I totally agree with the other comments here. Thats just shameful sillyness..

When you say ‘finally we have the…’ you did take into account that thinkTank launched this bag over a year ago an that this option ‘created by Lowepro’ is merely a direct rip-off of an already brilliant product?

I hate when people steal my photos, I wonder how thinkTank feel about Lowepro stealing their design ideas?

I have to agree with David’s comment… as a designer and photographer myself this is really a lazy move by the Lowepro design team. I bet at least one of them owns a ThinkTank Retrospective and thought by adding a magnet flap and zipped back that it would warrant as a new idea and hoped nobody would notice!?!?!