Post + Photos By RC Concepcion Lately, I'm convinced that Scott Kelby is a genius who has somehow devised a system to attract all the nicest and most talented people in the industry t...
T
P

Lately, I’m convinced that Scott Kelby is a genius who has somehow devised a system to attract all the nicest and most talented people in the industry to work with him. Case in point: R.C. Concepcion. R.C. is an inspiring education and curriculum developer for the National Association of Photoshop Professionals, co-host of the D-Town TV videocast for DSLR shooters, and a best-selling author of Get Your Photography on the Web. R.C.’s laundry list of accolades is enviable – but he’s also a really nice old-school gentleman who enjoys connecting with people through their passions and of course, photography. Here, R.C. muses on his experience navigating through Princess Leias and Tie Interceptors (don’t ask me!) at a Star Wars Convention.

I was chatting with Scott a couple of days ago about my experiences at the Star Wars Celebration that just happened in Orlando, FL – and he thought it a good idea to share them in a post. I walked into this opportunity not really being a Star Wars fan. I’d seen the second half of the movies as a kid, but never really got around to watching the three prequels. For the most part, I don’t watch a lot of movies, so it wasn’t something that I felt I was missing out on.

Why I Went
I’m a passionate person by nature – because of that, I find myself attached to people who are really into being passionate about things. I don’t follow sports, but I’ve always wanted to be friends with one of those superfans who paint themselves with the letter D and hang out by a stadium.

I’m the guy who drove by myself a ton of hours to go to the “RC Cola Moonpie Festival.” I love talking to people about the things that they love talking about. The sparkle in a person’s eye is just awesome – I guess it’s why I enjoy environmental portraiture as much as I do. To be able to go to a place where people get dressed up to pay tribute to something that they love was just something I couldn’t pass up.

I packed a bunch of lights in my car and headed out to the convention. I was prepared for anything – from small lights to a pack and head scenario. More often than not, I’m usually the guy that’s packing six strobes so this isn’t entirely out of character. It’s the McNally in me. Last minute – I threw my tripod in the car, not really knowing why. 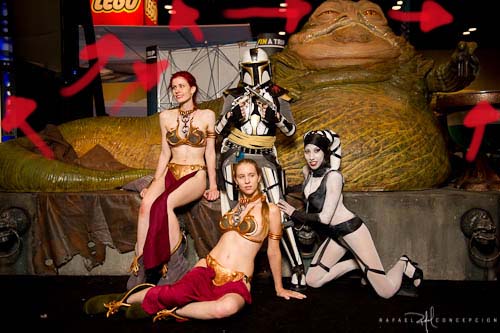 I walked around the convention and (thanks to my buddy Rob who VAL’ed and NAPP Member Don) had lighting assistance to make some portraits. Westcott 28” Apollo in hand, we tried our best to make portraits. The problem wasn’t really the lights per se, but more the concentration of the location and the mood. This Expo hall was packed with people and vendors, and in the middle of it, had huge dioramas made by a Belgian Star Wars Prop group of fans. The sets were amazing, but right in the middle of all of the other vendors. Try to get a shot of Jabba with some Leias – you were guaranteed to get some pipe and drape in the background, or another company logo in the shot. I definitely didn’t want that kind of shot, and I’m sure that the person whom I bothered to take a picture of wouldn’t want that either.

Feeling dejected, I walked to the corner of the expo hall – muttering how I drove all the way out there for the shoot to be a bust, when I saw a full scale replica of a Tie Interceptor (I guess they’re different from Tie Fighters. Did you know that Tie was actually TIE: Twin Ion Engine… yeah, neither did I) with some Storm Troopers posing for prints. That was my “Moment It Clicked.” 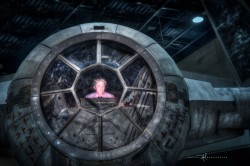 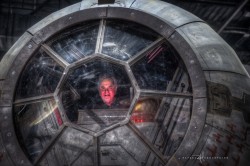 Here I was trying to shoehorn flash photography in a badly lit, tight space where people who were passionate about this stuff just wanted to feel like they were a “part” of the scene… like they actually stepped “into” that role. In a flash, I darted out of the convention with my rolling bag and lights and came back with the Tripod. HDR would do this moment justice.

I knew that in order to do this I would need access to the locations. For that, I grabbed my iPad, which had a library of my recent HDR work. I went back into the hall and I talked to one of the propmasters there. I explained what I wanted to do and I showed them what I -could- do with it. Bam! Whenever I walked into the scene, they roped off people and gave me the 40 seconds or so I needed to make the image.

In the process of making the image, I was fortunate enough to briefly meet Seth Green and Steve Sansweet – Ambassador of fan relations for Lucasfilm and I made some HDR portraits for them. I exchanged email addresses and went home to process some images and send back to them. Much to my surprise, they emailed me back with a full conference pass to come back the second day and do some more shooting!

I’m Invited Back
The second day, I brought the iPad with what I did the day before, and everywhere I went, I got willing fans to pose in the scenes. I made the shots as fast as I could and exchanged cards with the willing attendees to get them the images I made for them. 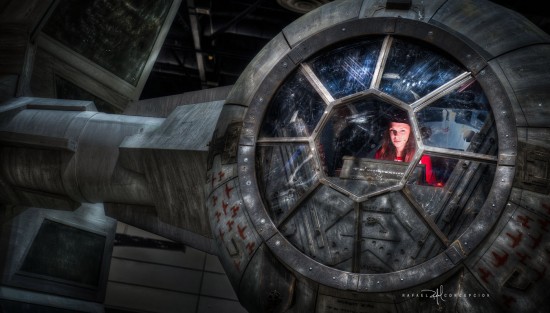 I was even able to go back to the huge Tie Interceptor replica and make a portrait with Melanie. Her and her father made this Tie Interceptor and she was very proud of her work. Two speedlights in the cockpit (backlight and dashboard left w/ gel) and a composite with an HDR of the scene. So on top of it all, I got to use lights as I wanted it, and I was able to get cool photography tales along the way.

HDR as a Purpose
I wanted everyone to feel like they were ‘in’ the movie and for that HDR solved the toning and lighting problems that I dont think could’ve been solved considering the time/location/lights that were available. I see HDR as one of those tools that you can learn how to do and put in your bag of tricks as a photographer – to pull out when you want to solve a specific scenario, or when you’re looking to have some experimental fun, but in this case I went to it for a very specific purpose.

I took a moment from this person’s time to sit on a speeder to try to make a portrait with a light. Chances are, that person would be happy to get a picture back of that moment and smile at it, but it wouldn’t bring out the passion that they had about making their costume in the first place.

Our Charge as Photographers We’re charged with making the best portraits that we can when we enter in an agreement with our subjects. If all we do is just strive to push the button, and never really see making the picture as a partnership, we’re just collecting baseball cards. To that end, i think we owe it to ourselves to become as aware as we can of as many techniques as possible so we can make the best picture possible. It serves the person, and ultimately can serve us as well.

I was able to make some cool connections with people, fill my photographic bucket, and make some fans happy getting them images they never thought they’d get. Commercially, I have three of these images that I’m selling as limited edition prints (only printing 15 of each image, period) and 5 are already spoken for – so its turned out positive even in that regard.

A big thanks to Steve Sansweet at Lucasfilm, Michael Wistock, Seth Green for the Portrait, Rob and David Rogers for VAL work, the Belgian Prop Crew for their unbridled passion and access, and to all of the people who stepped in front of the lens. I’ve even gone back home and watched the first 3 movies… so now I can say I’m a fan! 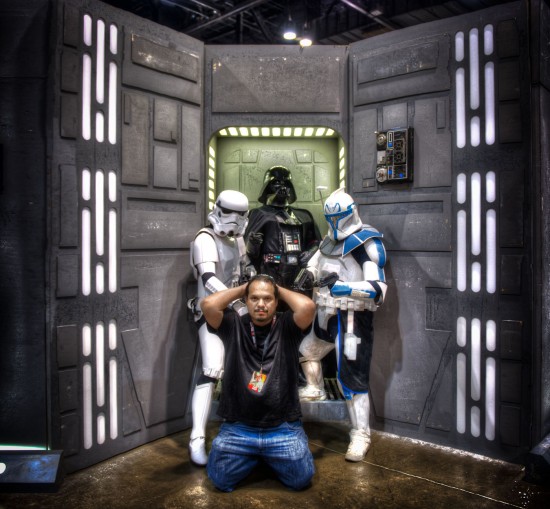 Looks like even in Star Wars, you can’t seem to shake the Tripod Police.

The Reverie of the Desert Nymph