How Social Media Opens the Door for 'Happiness Marketing'

Vital to any business is the big bad work of marketing. As a photographer, it's important for me to make connections with the people I shoot, and it can be hard sometimes to traipse into the world of ...
H
V

Vital to any business is the big bad work of marketing. As a photographer, it’s important for me to make connections with the people I shoot, and it can be hard sometimes to traipse into the world of marketing. In today’s guest post, Social Media Explorer‘s Kat French explains how we can use social media to overcome the bad rap of traditional marketing. A web copywriter, search engine optimizer, and social media manager, Kat has figured out that we can use social media to create a positive experience for our customers – rather than simply try to sell them something.

Really, when you strip it down to bare essentials, that’s our job: to make consumers unhappy with what they currently have, so they’ll buy what we’re selling.

While my career has been what could charitably be called “eclectic,” marketing, more specifically writing marketing copy, has been a big chunk of what I do for nearly 20 years now. My first job out of high school involved writing radio copy at a 250-watt radio station at age 18, and I’ll be 36 this year.

Back then, I was writing spots for toilet repair kits. Frankly, if your toilet isn’t flushing properly, you’re probably already dissatisfied. In my mind, I was just pointing you in the direction of relief from the aggravation. Ah, the innocence of youth. I’ve since learned a lot more about advertising, psychology, and worked on honing my writing into a razor-sharp scalpel capable of separating people from their disposable income.

As I get older, a business model based on making people dissatisfied and discontent seems less and less appealing.

For some people, the moral element of their work life isn’t really a consideration. I am not one of those people.

When people ask me why I want to work in social media, it can be hard to narrow it down. I love the authenticity, imperfection, and visceral honesty that it allows, even encourages. But I think that if I have to give a singular, most-important reason, it’s that in social media, I see the potential for marketing (or at least one channel of it) to evolve past making people unhappy, sowing seeds of discontentment, and being a massive envy-generating machine. 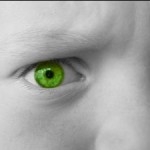 Sustainability is a big hot topic these days. A way of life that is fundamentally built on envy, acquisition, planned obsolescence, and pushing consumers to “need” more stuff to be happy is not sustainable in any sense of the word. I’m not naïve enough to believe that traditional, envy-driven marketing and advertising is going away anytime soon. But I’m excited about the new approach that social media makes possible. Really, it’s a set of old approaches that have been made more efficient, scalable and powerful. But that’s probably another post.

Social media offers a way to build your business by making people happier, rather than the other way around.

People who feel like they’ve been heard are happier than people who don’t. The guy who can share stuff he likes without getting a takedown notice from someone’s legal department is happier than the guy who was broadcasting someone else’s advertising for free, because he liked the product and thought the ads were entertaining, and was told via certified mail to stop. People who feel like they have some power to influence the businesses they choose to work with feel like they have some stake in and some level of stewardship for that company.

Lab rats don’t have the power to do much beyond gnaw holes in the maze.

The big irony is that here in the web 2.0/social media fishbowl, the effect of social media isn’t the same as it can be for the average person. That whole “bigger, shinier, faster” fixation I was condemning a few paragraphs ago? Alive and well in the fishbowl, isn’t it? More followers. More influence. Cooler tools. More power!

Heck, one can even be reduced to pandering for a set of awesome steak knives. It’s easy to lose your head.